The British superstar has recently released her first new song in six years, and her album 30 has already become a best-seller, despite having been out only since November 19, 2021.

Download Adele Easy On Me Sheet Music and printable PDF score and learn how to play the popular song in minutes.

It has been said that in order to write a good love song, you have to have your heart broken first. That may not always be the case, but the fact is, there is always a lot of emotion going into any best-selling song, and that is certainly true with the song Easy on Me by Adele.

What Is Easy on Me About?

The song Easy on Me is about divorce, in a way. In 2019, Adele separated from her husband, Simon Konecki, after being married to him for 11 years. As with most people who go through a divorce, she went through a lot of turmoil after the marriage broke up, and she described a lot of that turmoil in many of the songs on this album.

Specifically, though, the song Easy on Me is aimed at her young son Angelo, as she asks him to go easy on her after she decided to leave the marriage and cause such an upheaval in his own life. In this rolling, piano-led tune, she attempts to explain to Angelo why she did what she did, in hopes that as he gets older, he will start to understand why she had to do this.

No divorce is easy, especially on the children, but Easy on Me is a heartfelt plea to her son to try and go easy on her as he inevitably learns the truth about his parents’ separation and divorce. “I just felt like I wanted to explain to him, through this record, when he’s in his twenties or thirties, who I am and why I voluntarily chose to dismantle his entire life in the pursuit of my own happiness.”

Adele’s son has asked her many questions about the split that Adele admits she has no answers for, which is yet another reason why she wrote the song. Just like many singers and songwriters, Adele expresses herself through her music, and Easy on Me is a way to ask her son for his understanding and grace after such a tumultuous event. She hopes that as Angelo gets older, he’ll begin to understand why the marriage didn’t last and why she chose to carve out a new path for the two of them. Read more on our The Story Behind Adele’s Hit Song “Easy on Me” blog »


Preview & Download Easy on Me Sheet Music for piano, vocals and guitar 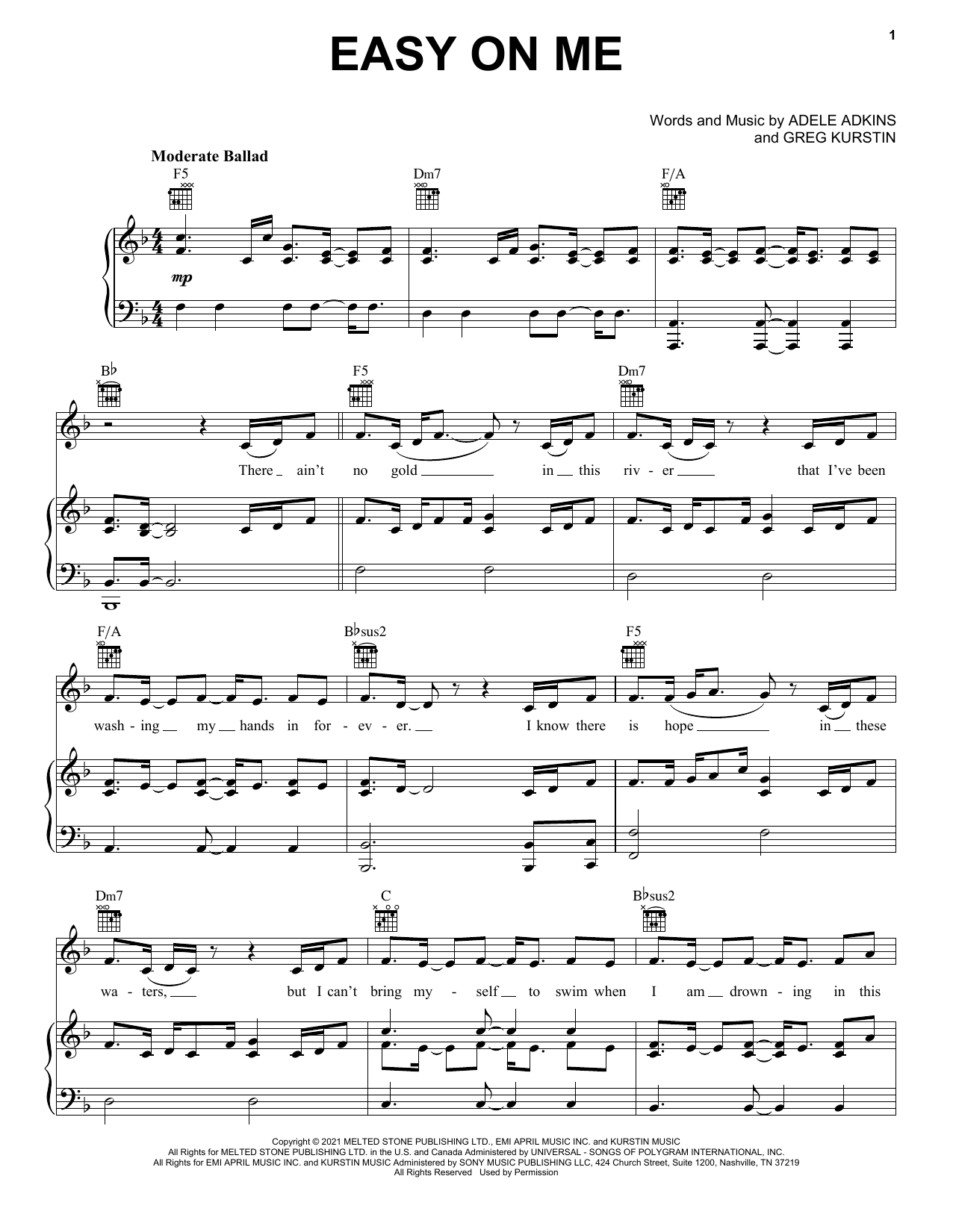 There ain't no gold in this river
That I've been washin' my hands in forever
I know there is hope in these waters
But I can't bring myself to swim
When I am drowning in this silence
Baby, let me in

Go easy on me, baby
I was still a child
Didn't get the chance to
Feel the world around me
I had no time to choose
What I chose to do
So go easy on me

Go easy on me, baby
I was still a child
Didn't get the chance to
Feel the world around me
Had no time to choose
What I chose to do
So go easy on me

Go easy on me, baby
I was still a child
I didn't get the chance to
Feel the world around me
I had no time to choose
What I chose to do
So go easy on me